They join thousands of donors from around the world who donated blood, saved lives and attempted to break a world record.

NEW YORK, August 28, 2022 /PRNewswire/ — Thousands of volunteers participated in #GlobalBloodHeroes Day on August 27, 2022 to save 150,000 lives. Together they intend to break the world record for blood donations on a calendar day. 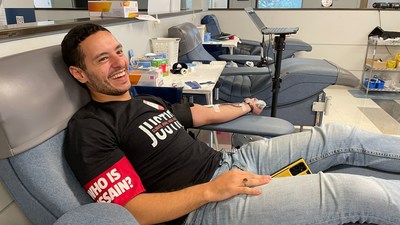 Globally, countries are struggling with blood shortages. To meet this challenge, the #GlobalBloodHeroes campaign was started by Who is Hussain, a community service organization focused on social justice.

Many of the world’s leading health and blood donor organizations have partnered with Who is Hussain. These include the Red Cross in several countries, Naryana Health in India, the National Health Service (UK), Vitalant (USA), and the Etablissement français du sang (EFS) in France.

The donations began in New Zealand and concluded in the US. They were made in 250 locations, 20 countries and six continents.

This campaign aims to be an international bid to break the world record for the most blood donations in a single day. The current record is 33,000.

The world record will be confirmed by Official World Records, a leading verification body recognized by the Council of Notaries of the European Union. They will be authenticated after blood donor organizations confirm how many #GlobalBloodHeroes participated in their respective countries.

Ultimately, with so many people participating in World Blood Heroes Day, lives have been saved. A single blood donation can help save three lives.

Muntazir Rai, director of Who is Hussain, said: “Thousands of people around the world answered the call to be a Global Blood Hero and save lives and break a world record. Who is Hussain was established to emulate the brave and compassionate legacy Hussain Ibn Ali, grandson of the Prophet Muhammad. On World Blood Heroes Day, that compassion was clearly demonstrated across all religions and none. Giving blood is a universal act that unites people around the world.”

SOURCE Who is Hussain